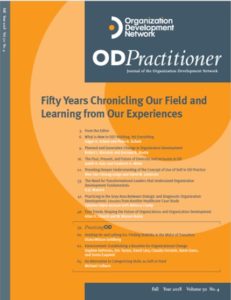 My article, Practicing in the Grey Zone Between Dialogic and Diagnostic Organization Development, originally published in 2013, has been reprinted in the 50th anniversary edition of the Organization Development Practitioner Journal. The reprint features an updated case study led by my Fraser Health team member, Melissa Crump. The case shows the powerful positive impact that results when people affected by changes are directly engaged in designing the change processes themselves.

Here are a few excerpts and figures from the article below. For OD Network members, the full article can be found by logging in here. If you are not an OD Network member and are interested in the article or want to learn more, leave me a comment below or contact me directly.

For those attending the OD Network conference this week – have a great conference!

In 2013, the Practicing in the Grey Zone article was published outlining how OD’s third generation methodologies that are anchored in social constructivist thinking and respond to our current complex systems ushered in the era of Dialogic OD. Since then, the literature and exploration of Dialogic OD has expanded, most notably with the book volume: Dialogic Organization Development: The Theory and Practice of Transformational Change of which I was a contributing author. In that volume and in their other writings, Robert Marshak and Gervase Bushe generally define Dialogic OD as a mindset and practice of Organization Development through which practitioners design and facilitate inquiry-based processes that rely on shared meaning-making to result in transformational change. The transformational change unfolds due to the occurrence of core processes of disruptive emergence, generativity and change in core narrative(s) underlying the dialogic processes (Gervase R Bushe & Robert J Marshak, 2015).

Practicing in the grey zone discussed the implications of working from a Dialogic OD mindset, along the continuum of diagnostic to dialogic methodologies used in the field. This sequel presents another case study in which working in the grey zone was successful addressed to achieve positive outcomes. We (Lead Consultant, Melissa Crump and I), describe our navigating and balancing of practice in the grey zone via the Dialogic OD consulting stages of Initiating the inquiry, facilitating the journey and sustaining the transformation (Gilpin-Jackson, 2015).

Table 1: Practicing in the Grey Zone of the Diagnostic to Dialogic OD Continuum. Reprinted for ODP 45(1) 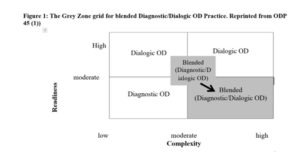 Excerpt of methodology in the 2018 case: Positive Deviance

Each intervention was specific to each group, as well as carried out in a way that achieved the desired outcomes, even if the group was not aware of the intervention. The overarching methodology used was the behavior science and social change approach called Positive Deviance (PD). The PD ideology is “based on the observation that in every community there are certain individuals or groups whose uncommon behaviors and strategies enable them to find better solutions to problems than their peers, while having access to the same resources and facing similar or worst challenges” (Positive Deviance Initiative, 2017). PD relies on self-organizing in ways that enables generativity and emergent solutions for complex challenges. The self-organizing methodologies commonly used with PD are called Liberating Structures (LS) because they liberate all to participate. These methodologies meet all the criterion for dialogic OD methodologies. The focus in this phase was to introduce tools and models found in LS to enable creative destruction, as well as prepare the client groups by demystify some of the self-limiting behaviors and patterns that are inherent in the group.

Positive Deviance was used at all three levels of interventions. The first being with senior leadership and surgical core group. A shift in their mindset and orientation to the work was essential to the success of staff. There was a need to move from the traditional hierarchical model to one that flips it upside down and essentially inside out, where the role of leadership is to support the ideas that emerge from staff instead of make decisions. Some may say leaders need to make decisions and there is no disputing that, however when achieving sustainable long-term change to socially rooted behaviors, we must ask the controversial question ‘how is that working for us?’ There can be a balance where leaders provide the minimum specifications needed in a change, however successful change is one owned by those carrying it out. See diagram below adapted from Arvind Singhal (2017) presentation. As the literature has also confirmed, OD thrives to support complex adaptive change when leaders manage the process but stakeholders define the changes required (Bushe, 2017) 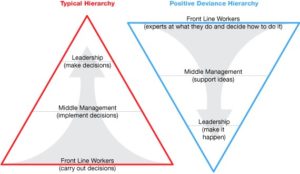