Excerpt from Story #4 in Identities: A Short Story Collection, The Rainbow:

Why do bad things happen? Why do children suffer and die?”… My mind squeaked to a halt. My mother’s heart suddenly started the jolting fall of an aging elevator, seemingly dropping in seconds all the way to my feet and then taking a slow, steady ascent back to its compartment in my ribcage, where it started thumping so loudly, I was sure she could hear it. The instant moisture on my forehead and palms matched the droplets of moisture so beautifully spread out and nestled on the fallen leaves all around us.….Her cornrows framed her oval face perfectly. The five strips I’d braided sideways in the front fell over her left temple, while the rows in the back crisscrossed until they came together into the shape of an open flower at the top of her head. The braided lengths actually looked like petals – because her thick curly hair was held too loosely to be tamed with the hair elastic that was meant to hold them together for the soccer game she was supposed to be playing. Instead, the lengths fell open, falling this way and that, forming their own shapes, as stubborn and beautiful as the head they crowned.  She was smiling as she watched me take stock of her. Her lips were full and her upper lip curled upward when she smiled, her double dimples further drawing attention to her high cheek bones. She was gorgeous, this child.

She reached for my face, her fingertips gently stroking my cheek, and then predictably, her fingers started exploring. I felt the tears well up at the back of my eyes. The clouds were dark again, as if to match my mood, and a tentative drizzle drop fell on my cheek, as if to encourage my tears to fall.

I guess today was the day I would have to tell her that she was representative of the question she’d asked. 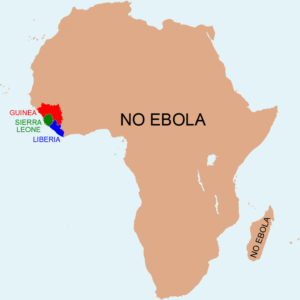 This story in Identities: A short story collection is a short and simple one – purely motivated by my pains, my hopes and my drive for social action throughout the Ebola outbreak of 2014 – 2016, which predominantly affected the West African countries of Guinea, Sierra Leone and Liberia. That Ebola outbreak was classified by WHO as a public health emergency of international concern and with that, many identity questions for people of African descent living globally was raised. As global concern grew, those of us from the countries most affected by the outbreak took to social media to post pictures with tags like: “I am a Sierra Leonean, not a virus.” Those from elsewhere on the continent protested the outbreak being broadcasted as an AFRICAN outbreak by posting and re-posting maps like this one that appeared in the Washington Post.

My goal in The Rainbow was to highlight some of the far-reaching humanistic and generational impacts of this crisis into the future, through the eyes of an adoptive mother and child Ebola survivor.

In the early days of the outbreak in June/July 2014, I had two epipanies. First, I realized that my love for the land of my heritage, Sierra Leone, ran deeper than I had previously recognized. The visceral pain I felt when I read the news or spoke to those in Sierra Leone on the frontlines of fighting the epidemic was debilitating. With every piece of news I received, I had that sickening heart-dropping-stone-in-my-stomach feeling. It gripped me and consumed me. With every story I read, every image of a child with Ebola I saw, I thought of my own young children. Ironically, it was but for those very children that I didn’t pack up and go home to be part of the efforts on the ground in Sierra Leone. Second, I realized that social action for change could take many forms. I could act on the message my heart was sending me, even though I chose not to travel home. I could do something, anything, to be part of the efforts. As soon as I got to that point, it was as if God said yes and suddenly, I had opportunities to take my own small actions towards educating and raising awareness here in Canada and the US about the impacts, implications and needs emerging because of the crisis.

In short order, I was part of organizing and speaking in a webinar series for my Alma mater, Fielding Graduate University, urging compassionate social action. I met fellow Sierra Leonean and women’s health advocate, Fatou Wurie during that education series, and was privileged to journey with her as an advisor and champion for the inception and launch of the Survivor Dream Project. I work as an Organization Development Consultant within the largest health region here in British Columbia, Canada and I offered myself to sit on the most senior policy committee planning the province-wide response should anyone travel in and test positive for Ebola in our province. I brought a much-needed nuanced and humanistic perspective to that group and was able to debunk assumptions and myths about the affected countries that was quickly noted and appreciated. As one doctor said to me directly during the process: “I know how to plan for clinical standards and to address the needs of the human body, but the psycho-social issues and questions you raise that will make our efforts succeed or fail – that stuff gives me the chills – because I don’t know how to plan for them.” I wrote a passionate and personal call-to-action for our health system, titled Counting the days to an Ebola-free West Africa, #heartache…And how you can help, #hope. It was shared in our 28,000 employee system at the time and garnered some support by many who contacted me directly to tell me how much it had impacted them and spurred them to action. A version of that call-to-action was re-posted on Sheloves magazine, as well as on several African women’s academic and social action groups (see examples here and here). I was invited to do a podcast for the University of Buffalo’s social work series (Post-Traumatic Growth and Moments of Resonance: Narratives on Ebola in West Africa), that quickly trended by that series’ standard. 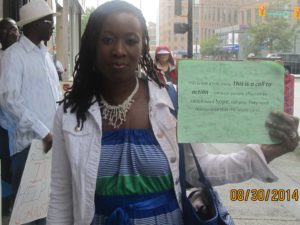 At an Ebola awareness and advocacy march in Vancouver, BC.

I joined our small local community march raising awareness for Ebola on a rainy summer day in Vancouver. I spoke wherever and whenever I could.

Part of me often wondered if these efforts made any difference to any one person who was sick or those who were mourning lost ones in Sierra Leone and the Region. It is also true in part that these efforts were an outlet to ease my own pain and discomfort evoked by the crisis. However, the biggest part of me knows that even if one person received help/support/hope from others because of the intermediary work I did – it mattered to that one person and family. It is the doubt about whether small actions we take will make a difference that often stops us. Imagine though the possibilities if we each never gave in to our doubts and just.did.it – whatever it is that’ll make a difference. There’s always an opportunity to make a difference if we keep our eyes, ears and hearts open. To me, speaking-up and taking action, no matter how small, is the most basic responsibility of having some measure of privilege in a world of pain and suffering that requires social action for change. The alternative – doing nothing – only perpetuates the status quo. Imagine the world of difference we – each one and all of us – would make if we chose to always listen and respond to the needs around us, every time. That was the point of the story, The Rainbow. It was about the hope that we can take action, no matter how complex and uncertain the implications are – because faith, hope and love will always win.

In the words of Margaret Mead: “Never doubt that a small group of thoughtful, committed citizens can change the world. Indeed, it’s the only thing that ever has.”