A Review of Identities: A short story collection 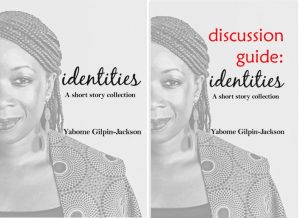 When my friend gave me her scholarly daughter’s book of short stories, I was expecting something rather dry and heavily pedantic that I would be obliged to lie about for diplomatic reasons. My bias was showing and I was wrong. My first impression was: Wow! Dynamite! So succinct! But my second reaction was that these ten stories deserve more meaningful reaction than that so I am trying to rationalize my emotional response.
This group of enhanced memories is fiction to be sure but almost too true. They are delightfully written in a light, loving and imaginative hand. They are carefully honed to offer a unique insight into the socially complex world of the child “from away.” I particularly enjoyed the use of patois in the dialogue.
The stories, while an end in themselves, spark thoughtful reverie.  Yabome has written a follow up book so that readers, book clubs and teachers have questions for discussion. I re-read the stories and my reaction was to buy five more books from Amazon as gifts for friends.
Dear Yabome,  Thank you for Identities, an explosive read. I hope there are more stories to come.

*GAYLE DZIS is a retired educator, with degrees in History, English and Philosophy who continues to offer writing workshops in Ontario. She has developed a life history writing course and teaches individuals and groups how to put life stories into manuscript form.  As a memoir workshop facilitator, she facilitates student production of a manuscript or tape which could be considered a primary document for historical purposes. Over the last ten years several of her students have self-published books in the Family History and Personal Life History genres. Books written and published by Gayle (1,2 &4) or written by students as class projects (4,5 &6)

Links to Blog Posts about each of the stories in Identities:

1. Where are you from?
-A young African woman experiences and describes frequent encounters of being asked: Where are you from?
2. Too much water in the garri
-First generation Canadian siblings take their first journey to Sierra Leone, West Africa, orchestrated by their parents.
3. Once upon a time at Fourah Bay College
-A student describes the carefree campus life that is interrupted by war and unexpectedly propels a group of friends far and wide into the diaspora.
4. The Rainbow
-A mother contends with explaining to her adopted daughter, who is an Ebola survivor, why bad things happen to children.
5. Back to the beginning
-The story of the struggle of one of the young couples from Fourah Bay College affected by the Sierra Leone war, to adjust to life and immigration to Gambia and Canada afterwards, told through the lens of the wife’s postpartum depression experience.
6. The day Aunty Amie died
-A young man’s experience in Canada on the day his once formidable Aunt dies back in Sierra Leone, that ends in a serendipitous encounter.
7. The Conference
-A scholar and her best friend struggle to reconcile the ongoing discrepancies and complexities of a conference community working for social change in Africa.
8. Standing in the rain
-A group of students of diverse African backgrounds and descent form a life-long community support group.
9. When I became a Black man
-A young man describes his first police encounter with racial profiling.
10.The Wedding
-The journey of a Canadian university administrator and an African graduate student to their wedding in Freetown, Sierra Leone that takes them back into the history and connection between the black American loyalists that settled in Nova Scotia, Canada and the Creole Peoples of Sierra Leone.