Identities Blog Series: Story #3 – Once Upon a Time at Fourah Bay College 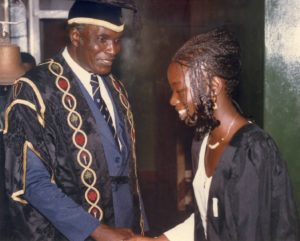 It is 6pm on Friday night and the campus has suddenly come alive. The energy is palpable. I think of this time of day on campus as the equivalent of the breaking of dawn on a Sierra Leonean morning. Life erupts suddenly at 6pm Friday on campus, just like the morning comes alive with no transition, emerging suddenly from the stillness with cocks crowing, frogs croaking and pots clanging. Admittedly, the buzz of the waking does begin sometime on Wednesday or Thursday evening with one activity or the other. But it really is like the lackluster cloud that hangs over us gets sucked out and replaced – precisely at 6pm on Friday night – with an air of revelous anticipation. The campus is suddenly filled with laughter, the buzz of chatting and loud callouts from every angle as students mill around. Just like right now. Someone just shouted out a phrase from a Bob Marley song:

And a number of random others just responded equally loudly:

… Three hours later, the party is in full swing. There we are: M-square, Yinka and Sullay, Janice and Harold and I, with so many other friends around us, dancing the night away. We, are invincible, and on top of the world. We couldn’t be happier… Exactly two years from now, we will be flung further into a world that we are unprepared for. We will leave another party to find out that the rebels have entered Freetown and announced that they are heading to our campus to “deal with those students.”

In 1995, I matriculated into Fourah Bay College (FBC), University of Sierra Leone in Freetown. That historic campus, once known as the Athens of West Africa, is the setting of story 3 in Identities: A short story collection. So, yes, I confess to this story being born of the sweet nostalgia of memories of being a student on that campus. However, this story is fundamentally about how normal, ordinary life, love and innocence, can be interrupted because of the socio-political environment around us. It is about the turns that life takes when the realities that exist outside us begin to impact us, because we were always part of the cycle in the first place.

In the late 90s, I was among students that fled this same FBC campus for fear of rebel reprisals on students after a military coup. Two short years later, I fled the country when civil war culminated into fighting in Sierra Leone’s capital Freetown. That period of time significantly shaped my life. I still think of my life as pre and post that time. Many experiences from then drive my perspectives and purpose now. I realized during this time:

In this story, I wanted to evoke the normalcy of life before war and share the love, joy, hurts and insecurities that normal, young adult students anywhere in the world might experience. I also wanted you to taste the particular rhythms and ambiance of FBC as I’d experienced it in the 1990s. I hope that this story in Identities reminds us, now, more than ever, that people who forcibly leave their homes, people who are displaced and people who migrate have normal lives before all that.  I want to remind all of us about the humanity of refugees and immigrants. I want to share that given half a chance, these we call refugees – people like me – will make twice as much of a life for themselves and do all they can to help others, because where they have been reminds them that life, though full of love and wonder, is also ephemeral and vulnerable.

For more about Identities: A short story collection, see here.