When Things Come Together… 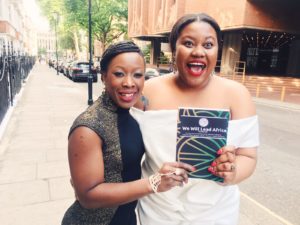 Fatou Wurie and I at the Women4Africa Awards ceremony

This past few weeks, I have been living as if in a dream. Less than 2 weeks ago, I was privileged to be named International African Woman of the Year 2017 in London, UK. The day of the event, I met a colleague, friend and sister who I had never met in person before. Fatou Wurie and I had virtually met 3 years prior when we were both on a panel to speak about the health and psychosocial impacts of the West African Ebola crisis of 2014 – 2016. We connected on our shared values and passions virtually and across the miles. After the webinar, we messaged each other and ended up speaking on WhatsApp for an hour and a half. It was the first of many connections and deep conversations. When we met last week, it was as if we had always known each other, always been in each other’s presence and company. She joined me and my family to attend my Women4Africa award ceremony and we screamed and celebrated over chocolates and champagne together afterwards. 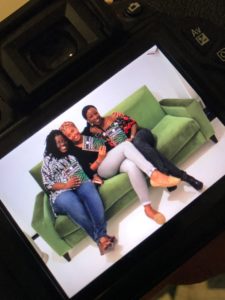 We Will Lead Africa Editorial Team at the Johannesburg book launch, May 25, 2017, Africa Day.

Five days after that, I landed in Johannesburg, South Africa and met my two co-curators and co-editors of the We Will Lead Africa project at O. R. Tambo airport. There was a wellspring of joy and emotion as Sarah Owusu, Judith Okonkwo and I stared at each other, hugged and laughed at the incredulousness of it all. We could hardly believe we were actually there and actually about to launch the book project we had worked for 15 months to compile. It was only the second time we had all three met in person. We originally met at the Organization Development Conference in Portland, Oregon in 2015. Sarah and Judith who are business partners and friends (sisters really!) attended the conference for 24 hours ONLY to present. I introduced myself to them right before they presented. We exchanged some hurried words I don’t remember much about and we made promises to stay in touch. I have gone to many conferences, given out many business cards and made many such promises before. But this time, I remember the sensation that I MUST follow-up with these women. I did. They responded. We connected via skype and google hangouts. After 2 calls, we were scheming, planning and working on the We Will Lead Africa Project together and talking weekly or bi-weekly. Last week, on May 25, 2017, Africa Day, we brought a community of people together to share the We Will Lead Africa book and project, and to celebrate the 30 contributors who are working for a more prosperous Africa now and into the future. Fatou Wurie was one of those contributors and we were honoured to have two others, Mimi Kalinda and Dr. Sal with us at the launch in Johannesburg. 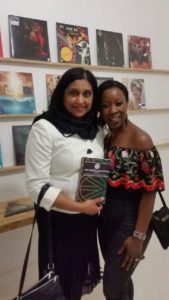 Dr. Sal and I at the We Will Lead Africa book launch

This brings me to the third part of this dream I am floating in at the moment. Dr. Sal and I were connected 2 years ago when I was in Johannesburg speaking at a conference. I’d mentioned I was on my way to South Africa to someone who connected us. She got a hold of a profile of mine and a paper I had written on the state of African Leadership that another colleague had been circulating, in the hope of getting me some speaking engagements while I was in South Africa. We spoke and she decided my perspective and work was exactly what she wanted to be part of the public service leadership development curriculum she was responsible for. She had already been looking for ways to update the public service curriculum to reflect African contexts and my paper matched her thinking! As a result, I was contracted to do a 2-day session with her team, but she wasn’t even there as she had to travel before I arrived. A colleague of hers from the provincial training academy of KwaZulu-Natal, Nirvana Simbhoo was at the session. Nirvana decided my work must continue and today, here I am, done my first week of doing leadership development sessions with public service leaders in Durban and I will be doing more of that over the next two weeks. Dr. Sal was in the second set of sessions this week. However, it was the first time she ACTUALLY saw me facilitate or saw my work for real. Dr. Sal, Nirvana and I sat over lunch today, marveling at all this. Dr. Sal is amazed at how she just KNEW she could trust me and my work even though she hadn’t met me and wasn’t there when I delivered it. She just KNEW. 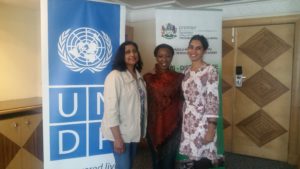 Dr Sal, Nirvana and I at the African Leadership Development Programme I’ve been facilitating in Durban this week.

Is it just me, or can you also see the pattern in these events? On a spiritual level, there is no part of me that can accept that these are all coincidences; that these were all chance meetings and that these uncanny and unlikely relationships that I have formed over the past few years were not meant to be. Furthermore, this all started when I was feeling a pull towards doing more work in the social change part of my field. Through prayer, reflection and journalling, I ended up deciding to do more work in African Leadership and do something I called “We Will Lead Africa” – I had many ideas but didn’t know what “We Will Lead Africa” would be at the time. Yet, it was after that that the events I describe here came together and unfolded.

On a practical level, I am reflecting on the following as I sit in the reality of working with the highest levels of public servants in South Africa today.

There is so much more I could write, but I will end here for today. I am in awe and oh, so grateful.